Augusta Residents Use Fire Damage Restoration to Return their Homes to a Pre-Loss Condition After Fire. 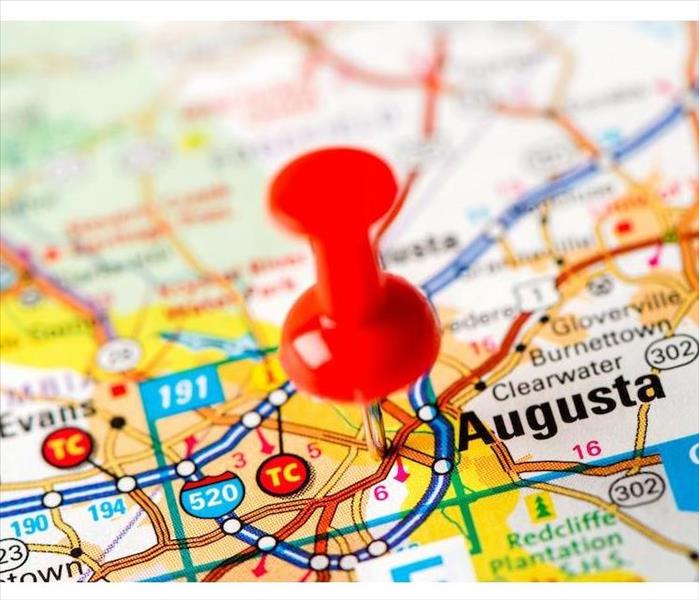 If your Augusta home experiences a fire catastrophe, Call in the experts at SERVPRO. We will leave your home looking "Like it never even happened."

SERVPRO of Augusta is Ready to Mobilize Expert Service Personnel and Equipment for Residential Fire Losses.

Along the Savannah River lies Augusta. This sprawling city has an estimated population of 197,000 people, while the comprehensive Augusta Metropolitan Area encompasses an even greater 600,000 residents- making it second only to Atlanta in Georgia's met areas. Perhaps the most famous event that brings people to this city is The Masters' Golf Tour, which takes place every year in the Spring months. Up to 50,000 people turn out each day to watch the finest Golf players of their generation tee off at the Augusta National Golf Club- often referred to as the National. The course itself was designed in 1932 by famous landscapers Jones and Alister Mackenzie. Outside of golf tournaments, Augusta offers fantastic weather thanks to its subtropical climate and mild winters throughout the year.

The city of Augusta is one with a rich history that goes back beyond the civil war. Downton is known as the historic center with buildings like St. Paul's Episcopal Church on Reynolds Street dating back to the mid-eighteenth century. This city's pre-civil war area can be found on the National Register for Historic Places and is protected due to its cultural and historical significance. The modern city is a diverse mix of traditional southern cuisine, far-reaching natural beauty, music, theater, and outdoor activities. Bringing together the city with the wider metropolitan area is the Savannah River, which runs for 301 miles through Georgia and Carolina before heading out into the Atlantic Ocean.

Visiting Augusta, GA, for the annual The Masters' Golf tournament.

The Masters represents one of four major golf tournaments that take place every year. Since 1934 this course has kicked off the tour season starting in April and running for four days. However, many enthusiasts seek out the much-coveted early tickets to observe the practice rounds. This invitational tournament is the smallest of its kind with just 92 contestants but remains among the most prestigious in global golf. Each year the winner is awarded the traditional Green Jacket, passed from victor to victor as far back as 1949. 2020 marks the first year that the Masters have taken place in the winter running from November due to the Covid-19 health crisis.

Tackling Fire Damage in your Augusta Home with Professional Guidance and Expertise.

Fire Restoration can be tricky. Smoke stains can come in many forms, while odors can permeate both furnishings and the interior of your building assembly. Correctly identifying soot deposits and the most effective cleaning methodology is an expert task. Homeowners with fire damage in Augusta can help reduce losses by light vacuuming to remove dry soots and cover the upholstery with old sheets to prevent further harm. However, tackling larger areas of smoke may inadvertently cause further damage to the property. The proper application of cleaning products requires careful testing of the soils to determine an effective solution.

If a house fire causes soots and soils to buildup on walls, furniture, or appliances, contact SERVPRO of Augusta at (706) 750-0200.