When You Plug Fire Damage Into Your Augusta Home 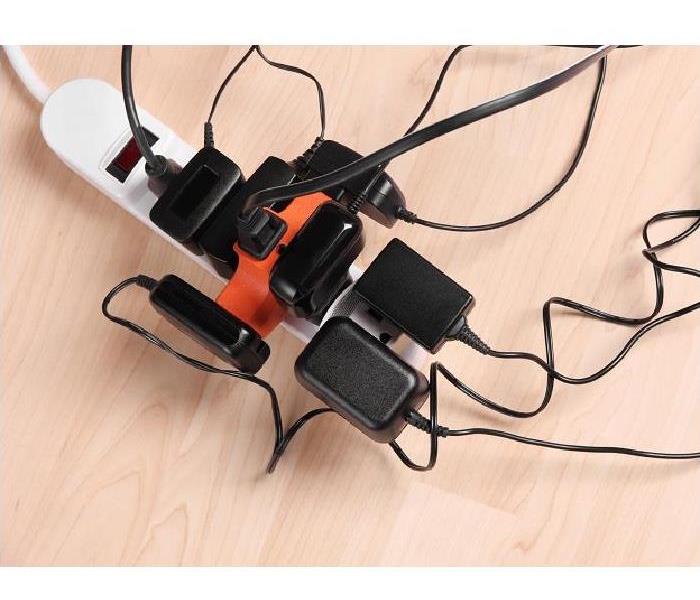 Improper uses of extension cords are a common source of fires.

When it comes to everyday items causing fire damage, extension cords are in the top ten. The U.S. Consumer Product Safety Commission (CPSC) estimates over 3,300 residential fires per year. When you have a fire in your home, it needs to be addressed quickly to minimize loss.

Fire damage in an Augusta home was caused by misuse of an extension cord. The homeowner was running a television, air conditioner, dehumidifier and toaster oven on a couple of strung-together extension cords. The ungrounded outlet in the wall got overheated and caught fire which was extinguished quickly but there was a large amount of damage to deal with when our technicians arrived, and the electricity was off.

Our technicians arrived on the scene soon after the initial call and brought our portable generators to run our equipment. The room where the fire occurred was quickly contained to stop any further spread of soot or odors. The damaged drywall was removed using controlled demolition techniques. Items in the room were inspected and removed if they were too damaged for restoration. Residual water from extinguishing the fire was quickly extracted. So the property could be dried, cleaned and disinfected.

Lingering fire odors remained in the room, so air scrubbers were used followed by the application of thermal fogging to neutralize odor-causing particulates completely. Once the remediation from the fire was completed, suggestions were made by our technicians for the completion of the restoration with the replacement of the damaged structural components. Our building services division was able to rebuild the damaged wall for the homeowner and install new grounded outlets to avoid a repeat of this scenario.

SERVPRO of Augusta is available to mitigate fire damage to your property 24-hours a day at (706) 750-0200. Our certified technicians have the equipment and expertise to handle any amount of damage and "We’re Faster To Any Size Disaster."